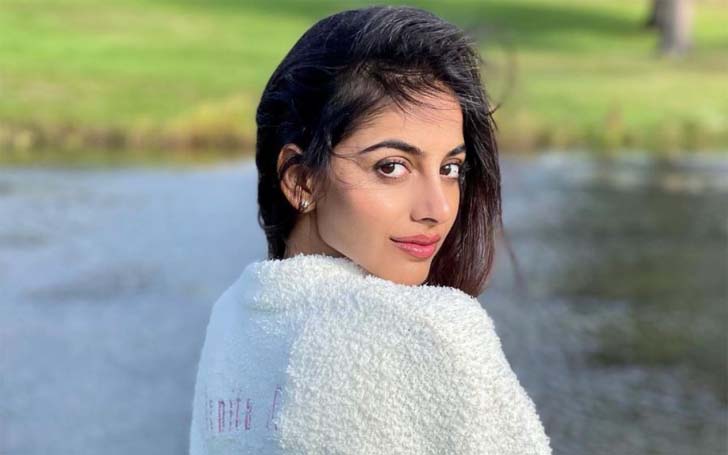 Banita Sandhu is a rising British-born actress who began her filmy journey from Indian Films. She came to the public spotlight on 2018’s Bollywood film October featuring Varun Dhawan and cast in Tamil movie Adithya Varma. Besides this, she also made her name in the international movie industry, appearing in the science fiction TV show Pandora (2019).

Sandhu’s career and entry into Bollywood were not that easy for her. She has to go through some sacrifices and struggles too. Although she is now one of the most demanded faces in the industry, the story behind her success is indeed worth reading. But before that, let’s begin with some Quick Facts about her:

When and To Whom Banita Sandhu Born?

Banita Sandhu was born to British-Indian parents in an ordinary Punjabi family on the 22nd of June 1997. The actress reached the age of 24 on 22nd June of 2021. Likewise, her birthplace was Caerleon, Wales, England. However, she further moved to London with her parents and settled there. As a result, Sandhu holds British nationality, and her ethnicity is Asian.

Apart from this, there is no information regarding Sandhu’s family background or parents’ names. Also, she has never mentioned them in her interviews.

From Where She Graduated?

Banita Sandhu completed her primary education in her previous hometown, Wales. And further received a degree in English Literature at King’s College London. Also, as per The Guardian News, the actress is pursuing her undergraduate study in London currently.

How Banita Started Her Career?

At first, she appeared in a chewing gum advertisement in the song “Ek Ajnabee Haseena Se” and later for Vodafone India. Though these are her initial face reveals and beginning to rise in the industry, Sandhu did not stop her step-in advertisements.

In 2018, Banita started her filmy journey featuring in a Bollywood movie October as Shiuli Lyer. In the film, she was cast opposite Bollywood actors Varun Dhawan and Gitanjali Rao. Furthermore, she has appeared in an American TV series Pandora as Delaney Pilar, which gained a lot of popularity.

The actress also shares an Emotional story of getting her hair chopped off for the first film October. In the movie, she met an almost fatal accident and has to cut her hair for real. Similarly, Banita wrote this heartwarming post on her Instagram.

What are the Popular Movies of Banita Sandhu?

Besides only appearing in Bollywood, the gorgeous actress has earned credits for the movies like Adithya Varma as Meera Shetty (2019), Eternal Beauty as Alex (2019), Sardar Udham as Reshma (2021), and Kavita and Teresa as Kavita.

Who is Banita Sandhu’s Boyfriend?

The actress mostly prefers to spend a peaceful life away from the media limelight. Banita’s secrecy has not allowed us to ask about her relationship or dating life in-depth. So, as of 2021, it is safe to say that Banita is single and has not been involved in any kind of relationship or has a boyfriend.

She is currently forced on her career and studies. And in-busy for the shooting of her upcoming movie Kavita and Teresa.

Is she active on social media?

Banita Sandhu has an active Instagram profile with the name ‘@banitasandhu’ having more than 407k followers. Likewise, she is active on Facebook with a profile name ‘@Banita Sandhu’, with around 812K followers. And finally, on Twitter, she has more than 34.4k followers too.

What is Banita Sandhu’s Net Worth?

Being a Bollywood and Hollywood celebrity face, it is evident that the actress has earnings in millions. As of 2021, Banita’s estimated Net Worth is around $3 Million and about 5 Crore in INR. She earns most of her money from her acting career and different advertisements.

What are the Body Measurements of Sandhu?

She has an approximate height of 5 feet 6 inches, whereas she weighs around 52 Kilograms. Moreover, Sandhu has black-colored eyes and dark brown hair. Other than this, her body measurements are 34-24-34 inches, including her chest, Waist, and Hips.