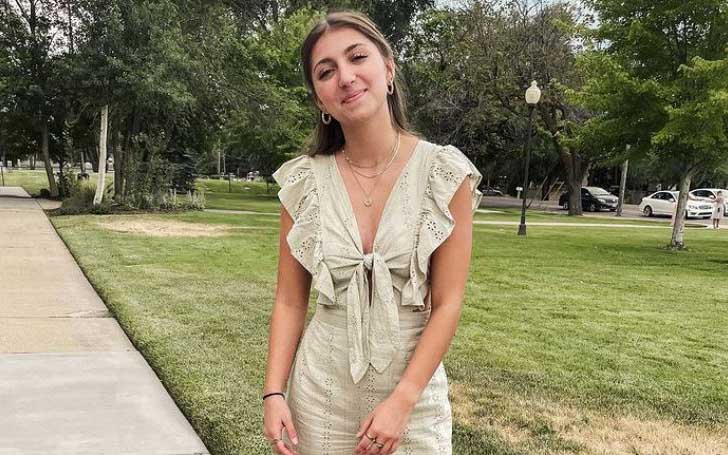 Kamri Noel McKnight, commonly known as Kamri Noel, is an American-born YouTuber and a talented Photographer. She is popular amongst the youngsters and current generation people for creating YouTube content which gone viral.

Besides her popularity as a YouTube star, the lady earned enormous fame from TV Series Crazy Fast portraying Violet Reed. However, all of her interests and motivation she gets from her family in which her father and mother are already have well-established in this profession. Let’s find out some more interesting facts about Miss McKnight’s personal life here.

Kamri Noel was born on December 27, 2002, in Glendale, Arizona, United States of America. Likewise, her age is 18 Years for now but soon be turning 19 as of 2021. She was delivered to a wealthy family of Shaun McKnight as father and Mindy McKnight as Mother. Both of her mom and dad are YouTubers by profession.

Moving on, Kamri shares an excellent bond with her five siblings. She has two twin sisters, Brooklyn and Bailey, and the other sisters’ names are Rylan and Paisley. She also has a brother, Daxton McKnight. Talking about her sisters, Brooklyn and Bailey are also popular creators, aka YouTubers. Besides this, Kamri holds an American Nationality and originates from a Scottish ethnic background.

Coming to the education section of Kamri Noel, she has completed her high school studies in 2019 and is currently a college student. However, there is no information about which and where she studies now.

Kamri Noel followed her parents’ footsteps and began her career as a YouTuber. However, there is always an initial point where everything begins; so as Kamri did. She first builds her audience by appearing on her mother’s YouTube channel alongside her siblings.

On April 26, 2014, the girl made her own YouTube channel with the support of her parents. However, she finally made her move by uploading her first YouTube video in 2016. She named her YouTube channel ‘Kamri Noel,’ which now has 2.07 Million Subscribers with a total view exceeding 294 Million.

Furthermore, to mention her one of the most popular and watched videos, “The PANCAKE ART challenge,” has more than 4 million views. Apart from YouTuber, she is a talented photographer too. Moreover, she is an actress who made her first debut from the movie “Like Me as Kalium.” In 2020, Kamri appeared in the TV show “Crazy and Fast” as a Violet Reed.

Kamri Noel is an 18-years teenage girl who is currently more focused on her career and is single as of 2021. She has not mentioned anyone she is dating or likes to spend time with, except her family. Her father, Shaun McKnight, is her hero and greatest inspiration. The girl spends most of her time with her siblings and parents and often travels to different places with them.

Apart from this, Kamri has not been involved in any controversy and scandals till now. There is also no information about Noel’s past relationships or romantic links. However, she kept it all away from the public spotlight.

Kamri Noel McKnight is as popular on other social media platforms as she is on YouTube. She has more than 1.6 Million followers on Instagram’ @kamrinoel’ and has around 115.3K followers on Twitter’ @KamriNoel’. Furthermore, the girl is also available on TikTok with over 1.4 Million Followers and 47 Million Likes on ‘@kamrinoel.’

Kamri Noel is a well-established YouTuber who is on the list of wealthiest YouTubers as of 2021. She has garnered a decent amount of money from her career and still moving further to make more. However, Kamri has an estimated Net Worth of $500 Thousand as of August 2021.

In addition to that, she also makes $21K to $210K yearly from her YouTube channel. And as a professional photographer, the lady received a monthly paycheck of $66K+, which is quite decent looking at her age and success.

Kamri Noel is a gorgeous-looking teenage girl who stands at 5 feet 7 inches in height. She recently measured her body weight which is around 55 Kilograms. Also, the girl has a pair of beautiful shiny blue-colored eyes and blonde hair. Kamri’s body measurements, including her chest-waist and hips, are 32-28-37 inches.