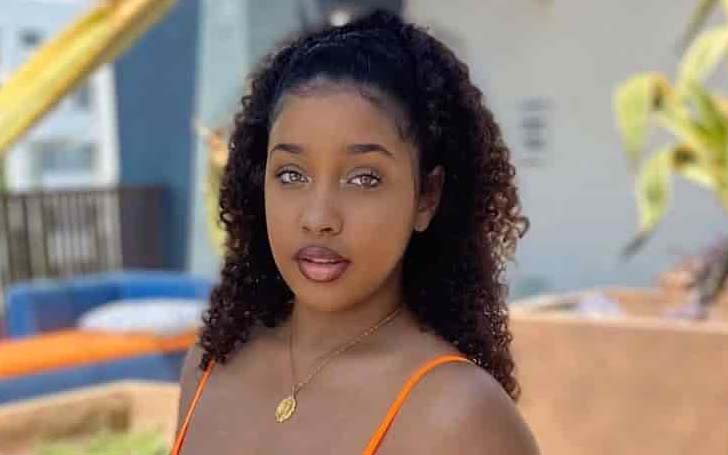 Corie Rayvon became known to the media after her relationship with Khalil Underwood. Furthermore, she is also a YouTuber who is known for her content on her channel related to beauty, reactions, pranks, and challenges. Further in this biography, you might know about her early life, personal life, Career, Net Worth, and so on.

Corie Rayvon was born on the 2nd of July, 1996, in Houston, Texas. She was named “Poopie” during her childhood days. Corie is 24 years old now as of 2020.  After spending some of her early childhood days she moved to Los Angeles in 2015 for pursuing her career and acting.

She holds an American Nationality and belongs to mixed ethnicity of black and white. She was graduated from Pearl High School and just after 6 months of her graduation, she became a mate of Jilly Anais. Corie has a sister too and she is a Makeup artist.

Corie Rayvon began her career by modeling simple sugar bear hair ads and Teeth whitening ads. She became the brand ambassador of Icon Swim. But she did not happy and satisfied with her advertisement jobs and hence, she moved to social media to start her career there.

Later on, with the help of her social media popular mate Jilly Anais, she created a YouTube Channel “Bestfriend Diaries” on 9th January 2016. The channel was created for posting fashion and beauty-related content along with several challenges and pranks.

You Might Want To Know About Carmine Gotti Agnello

The first video she posted was about a hair-related tutorial that is “My curly Hair” in 2016. Furthermore, she started posting content related to reactions, challenges, pranks, and storytimes. And similarly started collaboration videos with Jilly.

Mentioning her relationship rumors with Khalil Underwood. Well, Corie opened up her relationship with Khalil herself on the Media. The video went viral on January 1st, 2018 titled “We are back and we are better”. The romantic couple celebrated their new year’s eve 2018 together.

However, there is no any videos or photos can be seen in the Medias right now. As it may be because they are separated or just continuing their career-oriented activities. Corie and Khalil can be rarely seen together as they just making a little contact and collaborate with each other.

Khalil Underwood is a popular record-maker artist, a comedian, and an internet sensation for many. Corie joined him with a YouTube Channel “Khalil and Corie” created in October 2017. They were continuing their relationship with all love and collaboration make outs and have always been in the public spotlight.

Similarly, after their separation for some time they again announced their future projects and together with a comeback. It came out about opening a gaming channel. So this is it about their personal life stories for now.

As Corie Rayvon is an internet sensation, she indeed has a huge social media popularity as well as a fan following. She has got over 600k subscribers on YouTube, over 95k followers on Twitter. Further about her social media presence, she also active on TikTok with more than 30k followers and 83k likes.

Apart from her Social Media influence, she has a net worth of around $5 Million. She made it all through her hard work and non-stop continuation in content creating with full of Entertainment. Started from a very young age to the success she has right now. It is all because of her dedication to her YouTube, Instagram, and Modeling.

Related: What is Corie Rayvon Net Worth? Learn About Her Earnings and Salary

Corie is indeed a beautiful lady. Corie holds a height of 5 feet and 5 inches and weighs around 60 kilograms. Similarly, as she is a model so it is not surprising that she is a more conscious lady regarding her health and fitness.

Corie has a marvelous hourglass body which measures around 36-25-35 inches. She wears 6 UK-size shoes. Further regarding her eyes and hair, she got a beautiful pair of hazel eyes and pretty curled hair.