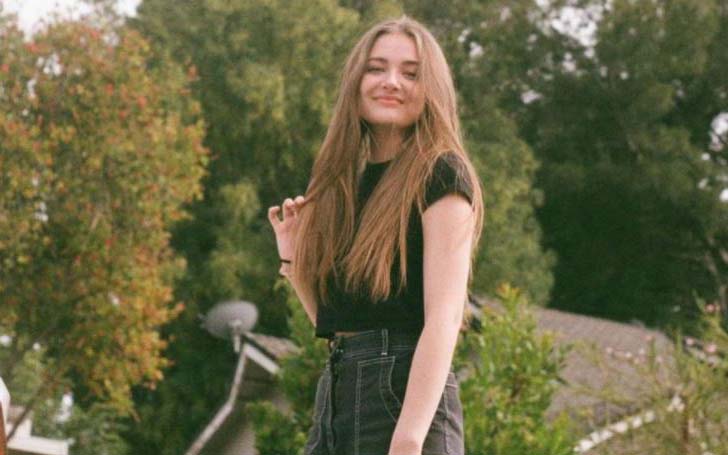 Movies and TV Shows are now a part of our daily lives. So it feels fantastic watching our favorite TV/ Film star whenever getting boredom. Similarly, Reylynn Caster is also an emerging American star actress, model, and social media star who is getting a lot of fans and attention due to her acting skills. She is the main face behind the role of Faith Newman on ‘The Young And The Restless.

Reylynn joined the entertainment industry through a local musical theatre and later started getting the role in films like Wichita, Bender, and The Matchbreaker. Just like her professional life, Caster’s personal life is also very colorful and exciting. Let’s find out how she is doing now ad what are her upcoming projects.

When and To Whom Reylynn Caster Born?

She was born on 3rd March 2003 in Wichita, Kansas, United States of America, to her father Curt Caster and mother, Teresa Caster. Reylyn’s current age is 18 years, and she was birthed under the zodiac sign Pisces. The teenage actress holds an American nationality and belongs to white ethnicity.

Reylynn Caster is one of her parent’s third children. She has an elder brother named Anthony Caster and sister Amanda Caster. Her father is a well-established businessman. As a result, she never faced any difficulties in her childhood days and lived a comfortable life with her family.

From Where She Gained Education?

Now, highlighting the educational background of this beautiful actress, she has completed her primary education in California. Although there is no exact information of the educational institutions she had attended, she might be attending a high school at present.

Reylnn grew up in an amicable environment where her interest and dreams have not been compromised. She is always passionate about acting and dancing in front of the cameras. As a result, she soon received a chance to be cast in the play ‘Sleeping Beauty. Then similarly, Caster made her first Television commercial at 7.

And finally began her filmy journey from the film Wichita as Mary (2014). Then, her potential to perform convincing roles has seen in the movie The Matchbreaker, where she played the supporting role of Lemonade Stand Girl. And similarly, appeared in the lead role as Ella in Adventures of Daily & Spanky (2019).

What are Her most Popular TV Shows?

Reylynn is a great actress whose TV shows are famous worldwide and loved by audiences. She appeared as Zelda is Speechless, Tiffany Spates in Walk The Prank, Brie Witherspoon in American Housewife, Lola Wight in The Big Show Show, and Faith Newman in The Young the Restless.

Who is Reylynn Caster Current Boyfriend?

Reylynn is a gorgeous teenage girl and a viral TV star. She is currently dating an American actor, singer, and model Armani Jackson. Their relationship is quite transparent as both used to upload pictures to their Instagram wall. However, there is no information on how they met or their dating stated, but both look so amazing together.

She is also more focused on her career objectives. As for a reason, Reylynn does not like to highlight her personal life. As a result, she has maintained a highly secretive lifestyle to avoid any controversy.

Reylynn has gained more than 138K followers on her Instagram profile live with ‘@reylynnc.’ Likewise, she has over 7.5K followers on Twitter’ @ReylynnCaster’ and has around 6.2k followers on Facebook. Additionally, the girl also has an active TikTok account with her name. She has more than 18.2K followers and 309.1K likes.

How Much is Her Net Worth?

Reylynn Caster is one of the aspiring actresses who has amassed a sizable fortune from her professional career. She earns through numerous advertisings, sponsors as well as modeling campaigns. As a result, Caster’s net worth is estimated to be around $2 Million in October 2021.

What is Reylynn Caster Height?

The beautiful and talented teenage actress stands at 5 feet 7 inches in height and weighs around 54 kilograms. Reylynn has a fantastic body and attractive appearance, which includes measurements 30-22-32 inches. She has shiny pair of blue eyes and silky brown hair.