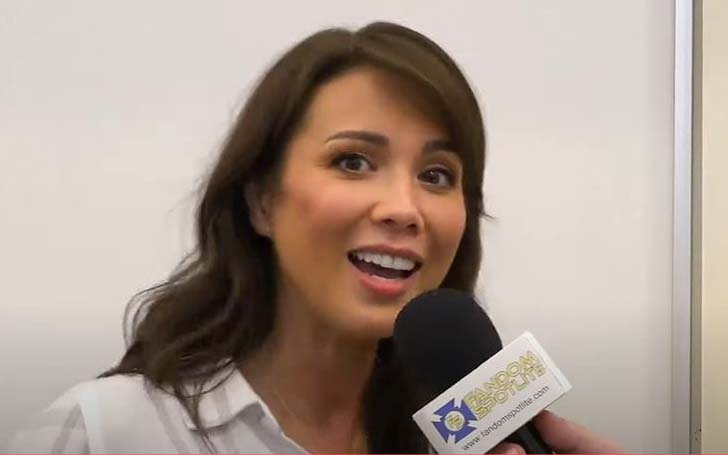 The entertainment industry is the place where a person lives their dreams and begins a new chapter in their life. However, in today’s era, the movie industry is getting behind compared to TV shows and TV series. Lexa Doig is no different than that, as she is a person who stepped into the glamorous world through TV shows and short movies.

Besides working in lengthy movies, Lexa made her identity as a Canadian-American actress through hits like Andromeda and Jason. In addition, the gorgeous lady also co-hosted a Canadian game show ‘Video and Arcade Top 10’. Learn more about her in detail in this biography article below.

The talented and beautiful Lexa originates from Toronto, Ontario, Canada, and her date of birth is June 8th, 1973. Calculating her current age by her birth year, she is 48 years old as of 2021. Similarly, her father, Davis W. Doig, and mother, Gloria B. Lecciones Doig, welcomed her with the birth name of Alexandra Lecciones.

Furthermore, Lexa Doig holds both Canadian and American nationality and belongs to the mixed ethnicity of Scottish-Iris and Philipino. Her father is an engineer and also worked as a petroleum officer in the past, whereas her mother is a registered nurse.

Where did Lexa Doig persue her Education?

The teenager, Lexa Doig, participated in a vocational program after school. Her expressions and role-playing abilities result from her being offered by a talent agent for various projects. At the age of 16, she has become part of modeling themes and events. But because of her career, she has to discontinue her studies in the final year of high school.

Finally, Lexa stepped into the television world as a second girl in “The Hidden Room,” released in 1993. Then, she appeared as a cowgirl in the TV series “TekWar” in 1994. Moreover, Doig also played the title role in the TV show ‘Andromeda’ (2000-2005). Aside from that, she has played Talia Al Ghul in the TV show “Arrow.”

Although there are huge lists of her projects and credits, here are some of the other best-known TV shows of Lexa Doig, which include Dr. Rowan LaFontaine in the movie “Jason X” (2002), Dr. Ccarolyn Lam in “Stargate SG-1,” Dr. Leah Pearlman in “V,” and Liber8 terrorist Sonya Valentine in “Continuum”. She recently has joined the cast of the horror series, Chucky.

Life becomes much more interesting and easy if you are with your favorite person, who is also your soulmate. Lexa Doig found her love of life through the movie ‘Andromeda’. She shared her screen with actor Michael Shanks, but they took their affairs a step further.

In the movies, Michael appeared as Lexa’s love interest, but that scene became the beginning of a real-life relationship. After dating for some time, Lexa Doig and Michael Shanks exchanged their wedding vows on the 2nd of August 2003 in Vancouver, Brock House. It was the best day of her life as she still shares her thoughts in public.

Do They Have Kids?

Moreover, the happiest couple was later blessed with two adorable children: Mia Tabitha as a first child (daughter) and Samuel David (son). However, Lexa is also the stepmother of a child, Tatiana Shanks, from her husband’s past relationship.

Currently, Lexa, partnering with her husband, has actively been involved in charities and fundraising. They are doing this for the Multiple Sclerosis Society of Canada.

Being a television personality, her popularity is way bigger than anyone could imagine. However, a rumor about Lexa’s death has been spread all over the internet, but this is not true in reality. Lexa is alive and very happy in her career as well as her personal life.

Lexa’s stardom and fan base are huge and due to that, there are multiple social media profiles of her on Instagram and Facebook. And because of this, it is a bit tough to mention her actual accounts. However, as per our research, Lexa has an Instagram profile with the name ‘@lexadoig’ having 31.9k followers.

How Much Lexa Doing Earns?

Lexa Doig has been enlisted among the richest TV actresses in Canada. Lexa’s earnings data and analytic show that she has an estimated net worth of $500K-$1 million as of 2021. However, her salary information is still under review.

Lexa Doig is a tall lady whose height is 5 feet and 6 inches and her weight is around 52 kg. She has a pair of dark brown-colored eyes and has long dark brown hair. Other than this, Lexa’s body measurements are 35-24-35 inches and her shoe size is US 8.